New York is still a top USA destination for Brits

With the pandemic almost behind us, Brits are finding their flying feet again and New York in the USA is still a firm favourite with UK travellers. If you're planning a trip across the pond, here's what you need to know including current Coronavirus restrictions and ESTA travel authorisation.

Outside of Europe, the USA is the most visited destination by Britons. Over 5 million UK travellers visit America every year and the second most popular destination in the United States is New York, also known as the 'Big Apple'.

A recent study showed that Britons are flocking to the other side of the pond with Orlando and New York being the top destinations. In fact, 6 of the ten most-searched worldwide destinations are in the USA.

There is no doubting the magic of Walt Disney World in Orlando Florida but New York has a unique magnetic magic all of its own, unrivalled by any other city in the world.

The pandemic outbreak put a real dent in international travel, which had been steadily rising year on year until 2019. After a two year lull in travel activity, people are taking to the skies again, thanks to high levels of Covid-19 vaccinations and increased immunity to Coronavirus.

Despite the fact that the number of visitors to New York City decreased by 67% in 2020 compared to 2019, the Office of the New York State Comptroller predicted that a record number of visitors will visit New York by 2025. In this blog, we're going to give you some very compelling reasons why you should be one of them.

Before we get into all the cool stuff to see and do during your time in New York, let's get the important travel stuff covered.

The very first thing you should do before buying your tickets and booking hotel accommodation is apply for an ESTA, mandatory travel authorisation to travel to the United States without a visa. This can be done quickly and very easily online. Once granted ESTA Validity lasts for up to 2 years, during which (EU and UK citizens) are allowed to make an unlimited number of trips to the USA with each stay lasting a maximum of 90 days.

There is a small charge of around Â£29.95 per person when applying for an ESTA USA. The online application form can be completed in just 5 mins and as soon as the official ESTA USA has been granted, you will receive an e-mail and text message confirmation. In urgent cases, this can happen within an hour.

In terms of Coronavirus restrictions, things are a lot easier now for travellers to America. Since November 8th 2021 tourists and business travellers from the UK and European Union can travel to the USA without having to undergo quarantine upon arrival, or after returning to the UK. However, all travellers need to have official proof of vaccination and a negative coronavirus test result. 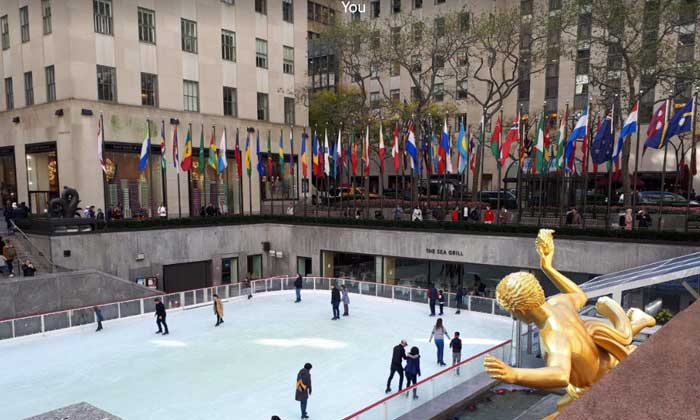 The Rockefeller Ice rink is a must-see if visiting during the winter months. Located at Rockefeller Plaza between 50th and 49th Streets, it's a tradition that has never failed to delight New Yorkers and visiting tourists.

Tourists and business travellers from the UK looking to visit NYC are spoilt for choice when it comes to booking flights. Nearly a dozen airlines combine to offer more than 30 flights a day between New York and London. There are so many flights between the two cities that the route recently became famous for being 'The World's First Billion-Dollar Airline Route'.

Lots of choice means lots of competition and lots of competition means amazing deals to be had. If you're lucky, you could get a direct flight from LDN to NYC for as little as Â£200. Using a cheap flights comparison website is the best way to score an amazing deal but sometimes it can be worth checking the big carriers because they bundle flights and holidays into a single product which can be quite competitive when you consider the cost of accommodation in the Big Apple.

The flight time from London to New York is approx 7h 55m and about an hour less on the return trip. Flying across the Atlantic Ocean is more than just a hop but it's so worth it when you get there. You will experience a bit of jet lag because there is a 5 hour difference but you should be back to normal in a couple of days.

A handy way to make a long flight sound not so long is to break it down into chunks of activity. So instead of thinking you're about to board an 8 hour flight, think of the flight time as say, a short read, a couple of movies, a meal, a snack and a short snooze.

Average price of a hotel room in New York City

The demand for hotels in the best spots on Manhattan Island is ferocious. On average, a room in a 3-star hotel will set you back around $492 per night, or $613 per night for a room in a 4-star hotel. Sounds eye-watering expensive right? Indeed it is but there are other options for savvy travellers.

You can find much better deals if you look outside of Midtown Manhattan or even think about searching for hotels in Brooklyn. If you really want to slash the price of your accommodation, you must try Airbnb, the online marketplace for lodging and vacation rentals. You can find deals on Airbnb for as low as Â£16/night per room in NY. 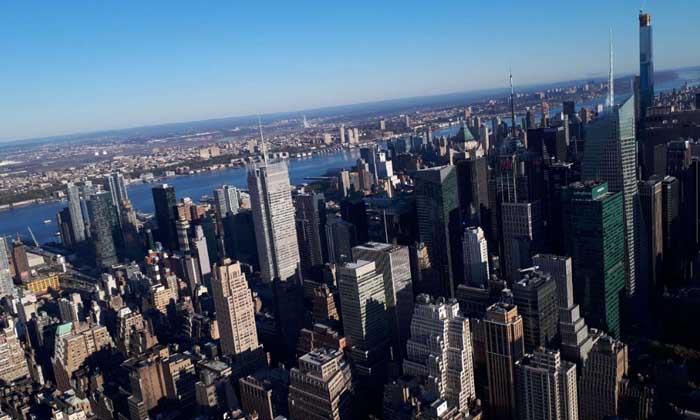 Breathtaking views from the top of the open-air observation deck around the Empire State Building spire, providing 360-degree views of New York, Brooklyn, Queens, and beyond.

NYC is one of those cities that is great to visit any time of the year. It's a very popular destination during the summer months but also visited by millions during the winter months. April to June is spring in the Big Apple and there are fewer tourists and the weather is pleasant, perfect for all the walking you will be doing during your stay. However, according to travel statistics, the very best time to visit is mid to late November to early December.

The fourth Thursday in November is Thanksgiving Day, the most celebrated holiday of the year. There are amazing shopping deals to be had and lots of festive cheer. It's really something special. You can also look forward to soaking up all the Christmas spirit, no where does Christmas like New York. If you're really up for partying, then you should time your visit for New Year's celebrations. Watching the Ball Drop in Times Square is an unbelievable experience.

The only downside to visiting NYC in winter proper is the weather. Sometimes it can get very cold. Cold and snow like you've never experienced on our green and pleasant land so keep an eye on the weather report if you're looking to visit late in December.

Culinery delights may not be the first thing that springs to mind when you think about visiting North America but New York is in a class of its own when it comes to catering for all kinds of dietary requirements.

Whether you're a high protein person or a dedicated vegan, the streets of Manhattan will provide your daily needs in abundance. 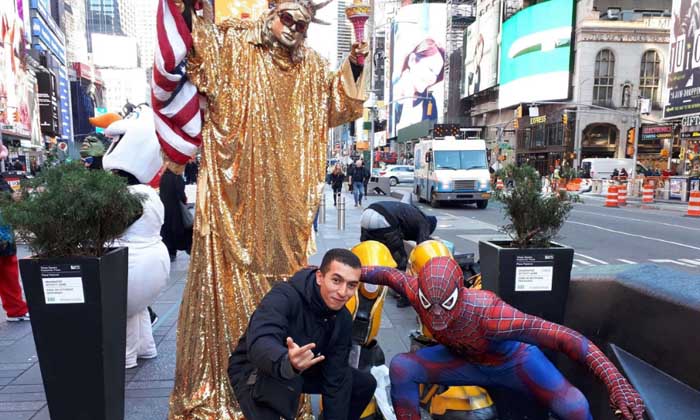 You might even bump into a superhero or two while visiting Times Square. Fantastic photo opportunities to be had. 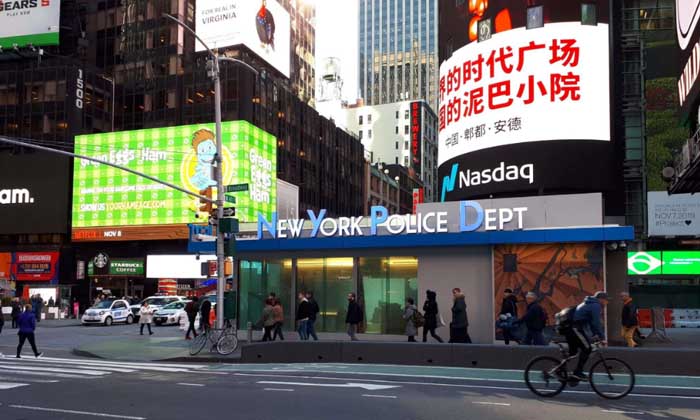 New York is very safe with high visibility policing in most of Manhattan.

Absolutley. In fact, New York City is one of the safest big cities in the world. Unlike the streets of London, the police presence in NYC is unmissable. Visitors are constantly under the protection of the city's friendly and vigilant police force.

The overall crime rate is relatively low in New York City and when crimes occur they usually don't take place in tourist-heavy areas. It's never a good idea to walk through any large park at night and Central Park is no exception. The rest of Midtown Manhattan is relatively safe even in the early hours of the morning.

Other attractions to see

It's incredibly difficult to cover everything you can do in a city like New York in one blog post. Our top 12 best things to do is certainly more than enough for your first visit to NYC but if you are a return visitor, you may want to try some other things.

Catch a sporting event at the world-famous Madison Square Garden

MSG as New Yorkers call it, is home to two of the most legendary American professional sports franchises: The New York Knicks (NBA â Basketball) and the New York Rangers (NHL â Ice Hockey). Madison Square Garden is also host to some of the biggest and most iconic boxing matches of all time. If sports isn't your thing, how about a concert featuring some of the world's best-known artists?

Both The Knicks and The Rangers season runs from October to April. Schedule and pricing is available from August onwards. Sports fans should keep an eye on the Madison Square Garden website for events and tickets.

Jay-Z and Alicia Keys said it best in the hit track 'Empire State Of Mind' when they described New York as a 'concrete jungle where dreams are made of' and 'There's nothin' you can't do'.

However, if you disagree and you think New York is just a bit too much for your liking, don't forget about the rest of the USA. The United States is a huge country and has something to offer every traveller. It's so popular that 5 USA cities have made the top 10 most desired destinations for Britons.

Most popular destinations for UK travellers

Thanks for reading and happy travels, wherever that may take you.

Next: 3 Free Casino Offers to Never Take for Granted