Home - News - We got our free Irn-Bru Can

We got our free Irn-Bru Can

We spotted a free Irn-Bru giveaway on a Facebook sponsored post and moved swiftly to get our voucher which we redeemed for a nice cool 330ml can. 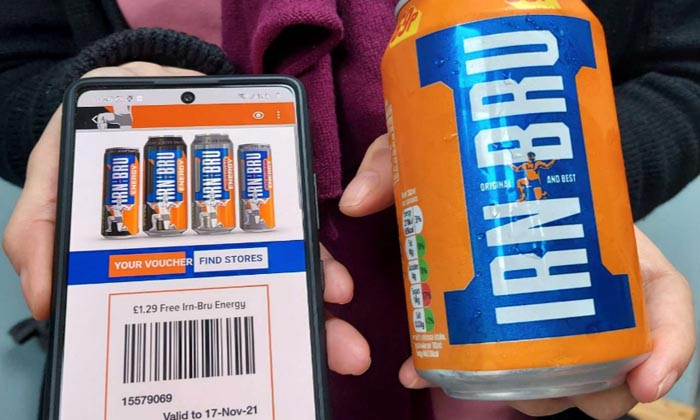 This freebie came and went so fast but we managed to get our mitts on one before it disappeared into the freebie ether.

We spotted a sponsored post on Facebook from Irn-Bru giving away 10,000 330ml or 500ml cans of IRN-BRU Energy drink, up to the value of Â£1.29. We knew this wasn't going to last long so we moved like we had a purpose and clicked on the 'Get Offer' button on the sponsored post which directed us to a special voucher page on the Irn-Bru website.

All we had to do to claim the voucher was enter a valid mobile phone number. Within seconds, we received a text message from Irn-Bru which contained a link to collect the QR code needed to redeem for a free can and participating stores.


We had a thirst on that an Irn-Bru would satisfy in a hurry so the button to search for participating stores got tapped and luckily for us there were around 9 stores very close by that would accept the QR code.

Off we trotted to the nearest store which was literally just 3 mins away and successfully redeemed for a free can. The voucher was actually valid for 7 days but we only needed 5 mins tops to cash it in.

Unfortunatley for many others the Facebook ad was taken down within a couple of hours after we published it on the website.

We have a sneaky suspicion that there are still more vouchers available because the terms and conditions on the Irn-Bru website said the promotion will remain open until the 31st of December 2021 or once all the 10,000 vouchers were redeemed. We tried to save the page where the vouchers were being offered but it wasn't letting us. The only way to get to the page was to click through from the Facebook post.

It's worth liking the Irn-Bru Facebook page and hoping that the offer will appear again in your news feed.

Never heard of Irn-Bru or never tried it before? IRN-BRU is a carbonated soft drink launched in 1901 in Scotland and is made to an original secret recipe, which contains 32 flavours.


Irn-Bru is also known for its distinct orange colour, both inside the can and outside. If you thought Lucozade was the original and first orange coloured energy drink, you would be wrong.

Is IRN-BRU and energy Drink?

It sure is. In fact, one could argue it was one of the first energy drinks made right here in the UK. The story goes that in 1901, steelworkers working on the re-building of Glasgow Central Station were drinking too much beer to quench their thirst. When a local soft drinks manufacturer named AG Barr caught wind of this terrible situation he conducted a tonic-like drink made with caffeine and sugar that would give the workers the energy boost they needed to get through a hard day of grafting. 'Iron Brew' was born and the rest was history.


As far as freebies go, this wasn't one of the best but sure was satisfying to enjoy without having to spend a penny.

We say it all the time, that you really need to be super quick to get your hands on freebies. The early bird catches the worm.

Register for the chance to get a free box of Biscuiteer biscuits designed in collaboration with the Royal Horticultural Society and containing 16 lemon biscuits presented in our famous square-edged keepsake tin.