STARZPLAY is a hot subscription channel available through Amazon Prime, you can unlock a huge library of spectacular shows and movies by joining up today. Read on to find out some of the best shows and movies STARZPLAY has to offer. 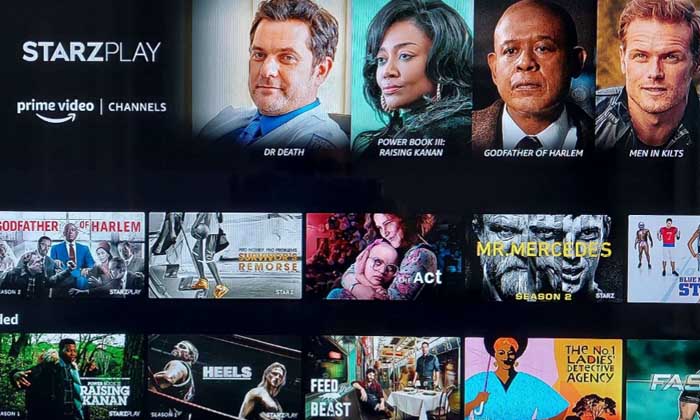 The breakout show that has received the highest rating on STARZPLAY is the Power TV series. Power was created by Courtney A Kemp and Curtis 50 Cent Jackson. It tells the story of James 'Ghost' St Patrick, played by Omari Hardwick. St Patrick is the proprietor of an upmarket Manhattan nightclub, who leads a dangerous double life as an underworld drug kingpin.

Power has been so successful that there have been two spin-off shows, one sequel Power Book II: Ghost, that continues the story of one of the characters, Tariq. He tries to juggle life between the criminal world of drugs and gangs and attend college. Power Book II: Ghost stars iconic RnB singer Mary J Blige as Tariqâs mother, who puts in a phenomenal performance. Rapper Method Man is also in the cast.

Power Book III: Raising Kanan serves as a prequel to the Power franchise and has just been released this year. It follows the younger life of Kanan Stark, played by 50 Cent in the original show, and is set in Jamaica, Queens in the early 90âs. 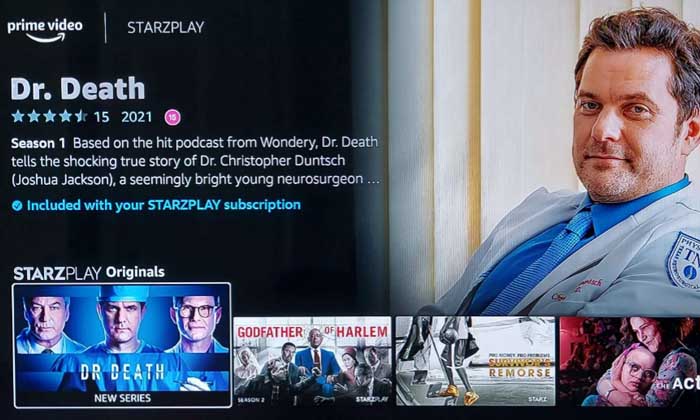 Dr. Death is just one of the top-quality shows now streaming on STARZPLAY. Other titles include Godfather of Harlem, Power Book II Ghost, Heels and many more.

A major new show to hit STARZPLAY is Dr. Death, starring Hollywood heavyweights, Joshua Jackson, Alec Baldwin, and Christian Slater. Dr. Death is a grim but true story about a Dallas Neurosurgeon by the name of Christopher Duntsch, that brutalises his patients in botched spinal surgeries. Jackson plays the dreaded Dr. Death impeccably and the story sees Baldwin and Slater as two concerned Doctors that embark on a mission to hold him to account.

Another new topical show to watch is Seduced: Inside the NXIVM Cult, this is a four-part documentary about India Oxenbergâs time as a sex slave in the NXIVM cult controlled by Keith Ranieri and Smallwood actress Allison Mack, both of whom are currently behind bars in the US.

India Oxenberg whilst under the control of NXIVM, was branded with Ranieri and Mackâs initials and recruited other young women to do the same. Oxenbergâs mother is a famous British actress from the 80âs soap Dynasty and she waged a war against NXIVM, gathering evidence and was determined to pull her daughter out, and then finally it was brought down by the FBI.


The Act, sees Patricia Arquette put in an outstanding performance as the overbearing Mother of Gypsy Rose. The Act is the true story about their toxic relationship and tells the story of years of lies and abuse that ends in murder.

Oscar winner Forest Whitaker plays the infamous Godfather of Harlem, Bumby Johnson. Set in Harlem in the 60âs this show is very well made and authentic. Great acting, sets, and costume are all in attendance in Godfather of Harlem that is a prequel to the blockbuster movie American Gangster, starring Denzel Washington.

Another cool show to watch is Pennyworth. This is a unique series that tells the story of Alfred, the famous Butler of the superhero Batman/Bruce Wayne. Pennyworth takes us all the way back to London in the 60âs when Alfred, an ex-SAS soldier, starts a security firm with Thomas Wayne before he has made his fortune. This is a fun show and stars Brit-pop singer Paloma Faith.

Doom Patrol is a series featuring one of DCâs most loved bunch of âoutcastâ superheroes. The Doom Patrol includes Robot Man, Negative Man, Elasti-Woman, and Crazy Jane all headed up by a mad scientist, Niles Caulder aka The Chief. All the heroes have acquired their powers through tragic circumstances and have been shunned by society. This is rated age 18, so definitely not for the kids but older DC fans will certainly enjoy it.

Men in Kilts is a new show that explores the beautiful country of Scotland. Sam Heugan and Graham McTavish take a road trip to remember and give us a good look at the culture and history of Bonny Scotland, with breathtaking scenery and lots of laughs along the way.


If youâre a fan of American comedy shows then have a watch of Blue State Mountain and Survivors Remorse. Both are sports-oriented and lost of laughs to be had. Survivors Remorse follows the Calloway family as they navigate their new wealth created by Cam Callowayâs move to play Pro-Basketball in Atlanta.

Blue State Mountain is a crazy comedy about a college American Football team and all the high jinks they get up, expect lots of rude laughs and silly gags.

If youâre in the mood to watch a movie STARZPLAY has a vast array to choose from. Romance, Comedy, Sci-Fi or Horror, there is something for everyoneâs taste. There is lots of classic movies that everyone can re-watch or enjoy for the first time. Here is a small selection,

There is currently a great offer on STARZPLAY where you can sign up for only Â£1.99 per month, for six months, normally it costs Â£4.99 per month. So, this is a huge saving and a good way to try it out to see if you will enjoy the content.

If you are looking out for some new shows, wanting to try something different then I would give STARZPLAY a look. There are lots on there for all viewing tastes and you get to see shows that would not ordinarily make it to terrestrial TV. The library of films is very impressive, and it will take you many hours to get through.

How to watch STARZPLAY

To subscribe to STARZPLAY, you do need to be an Amazon Prime subscriber and stream your content via a Fire TV Stick or similar. You can also enjoy loads of other streaming channels with the FireTV stick such as Netflix, iPlayer, Disney+, 4, ITV Hub, and Now TV, to name but a few.

How to cancel STARZPLAY subscription.

There is no contract or commitment to STARZPLAY and you can cancel your monthly subscription at any time by logging into your Amazon Prime account, click on âMembership & Subscriptionsâ and then click on cancel. 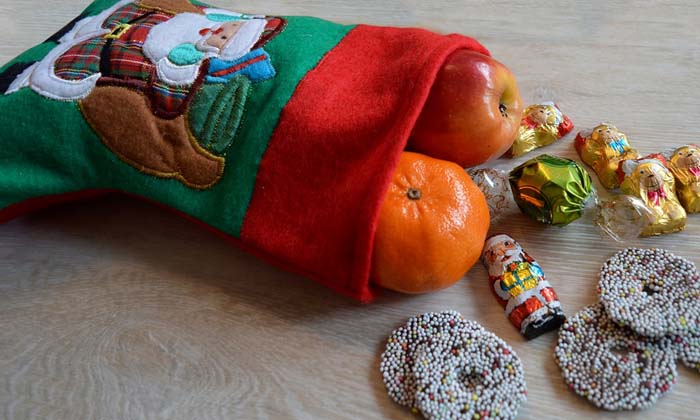